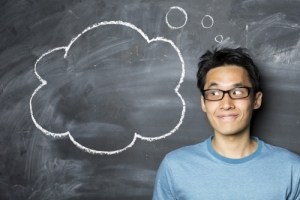 It seems that now more than ever we experience change and adversity. Evidence seems to back up the change part of this equation although adversity might not be as bad as we often perceive it to be.

Whatever the case may be, a solid understanding of managing and working with risk, improving our decision making skills and becoming well versed in critical thinking is of massive importance. Here, Dr Rick explores in the first part of his series how we might go about achieving these aims.

Throughout life we are constantly making decisions both personally and professionally. For both these areas of our lives the decisions can be very simple or more far-reaching. Some personal decisions are very simple like what to wear or what to eat each day whereas other decisions are far more significant and involve personal relationships, our finances or our choice of job.

Equally in our professional lives we are constantly making decisions and again they may range from straightforward decisions about how we prioritise our work to decisions that will affect the livelihoods of many people such as whether we should acquire another business; or indeed some decisions may literally be life or death decisions for those in the emergency and health services.

So how do we make better decisions? In order to improve our judgement, whether it’s about personal choices or business decisions, there are three elements we need to understand:

Over the next few weeks we’ll be looking at each of those elements individually, this article is going to help us to focus on the first element – risk.

Risk is defined as a situation involving exposure to danger, harm and loss. In times of change and adversity there is a tendency to become much more threat sensitive and risk averse; and this is true of both individuals and corporations. Those of you who have read my book Think Yourself Happy will know about the links between threat sensitivity, pessimism and risk aversion. However it’s equally important in life not to underplay risk and therefore become over optimistic about our chances of success (or the Stockdale Paradox which is mentioned in more detail in Think Yourself Happy).

It is interesting to remember what the world’s most successful investor, Warren Buffett, has to say about taking risks:

Risk avoidance is actually our default position, though some, (mainly men), have more appetite for risk than others e.g. gambling or dangerous sports which are often seen as ‘macho’ activities. So why do we have a tendency towards pessimism and threat sensitivity? It’s simply down to evolution – survival means being able to spot danger and take appropriate action to avoid or deal with it. Paradoxically though, those who were prepared to take risk were often seen as leaders – embracing risk in order to succeed. Although relatively few leaders are noted for their pessimistic attitude they often use fear very effectively in the influencing process (remember how the leaders of both remain and leave factions in the Brexit debate tried to use fear: fear of mass immigration vs fear of economic meltdown). Whilst emotion usually beats logic it’s not always a good thing and it can be difficult to be ‘greedy when others are fearful’ as contagion plays its part as an unconscious bias.

However, the other side of Buffet’s equation, ’be fearful when others are greedy’ is also quite hard to follow due to another bias known as ‘loss aversion’; we all hate the thought of losing out on a good thing. The number of people who bought foreign properties for example in the lead up to the financial crash of 2007/8 is a good example of this.

In order to make better decisions we all need to be more consciously aware of the two essential components of risk:

To put it more simply there are three hurdles to overcome in analysing and managing risk:

It helps if we can analyse each of these separately 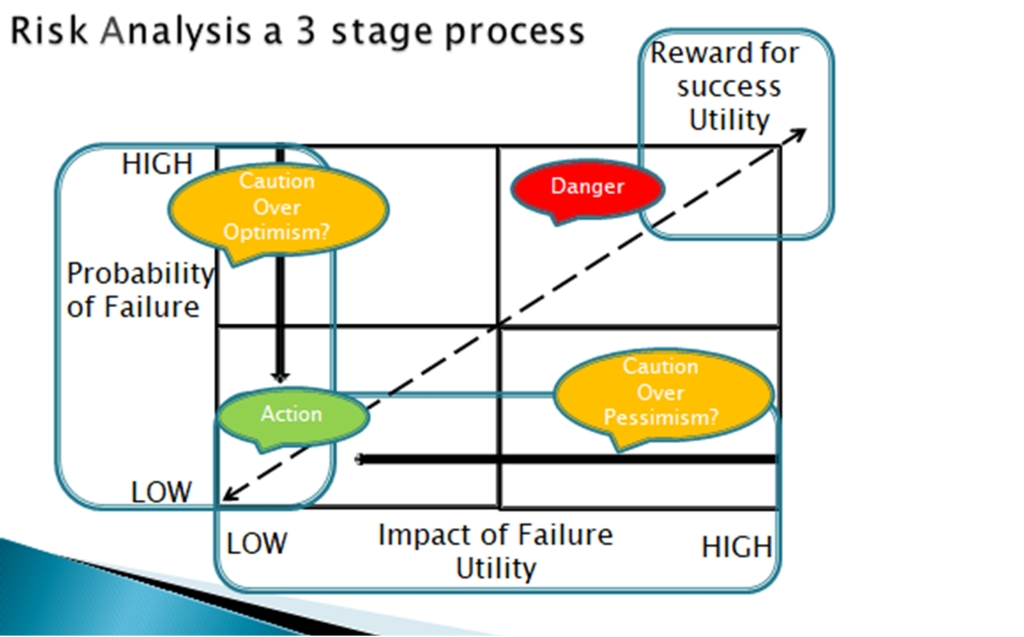 The above model offers an opportunity to consider different risk scenarios:

For example if a friend asked you to invest £5,000 in a business venture which was quite risky but had the potential to return £50,000 in three years’ time you would need to be able to assess the probability of the business failing, and how serious the impact of losing £5,000 would be for you. If you felt that the risk of failure was quite high and the impact of losing £5,000 was also quite high you could do two things:

– Offer to invest £2,500 thereby reducing the negative impact of failure but also accepting that your potential reward would reduce to £25,000

An example of this might be someone who decided to invest a small amount of money in bitcoins when the idea was first mooted. £100 invested in bit coins on 1st January 2011 would have yielded £6,594,267 if you had sold on 17th December 2017! However very few investors would have made that kind of return, but this is the kind of story that can lead us to being over optimistic. In circumstances where you are prepared to risk an amount of money that will only cause a relatively small negative impact you only need to do one thing:

So an investor who took the time to research the subject of cryptocurrencies would have increased the probability of making a successful investment.

A good example of this would be deciding whether to take part in a sponsored parachute jump. Here we need to do only one thing:

– Reduce the negative impact of failure. We can do this by practicing diligently to make sure we are well versed in all the correct techniques to minimise the chance of injury.

NB the probability of failure really is quite low for parachute jumps: In the UK for all types of parachute jumps over a 20 year period there were 4,864,268 descents with 41 fatalities, giving a fatality rate of 0.8 per 100,000 jumps. This includes both “Demo” jumps (which have a statistically higher chance of injury \ fatality), and the use of “Round Parachutes” (Discontinued in mainstream sport use and also responsible for higher injury rates). If you look at Tandem Skydiving (the most popular first jump course in the UK) there were 472,684 Tandem Jumps in the same 20 year period with a zero fatality rate.

The situations above are on the whole relatively simple and we may only be juggling a few variables. When situations are more complicated with more variables the decision making process might not lend itself to an analytical approach quite so well.

Let’s take a situation where we are considering selling our existing house and moving to a larger, and considerably more expensive property, which would require sustaining the ability to pay a much bigger mortgage.

Success or failure would be related to our continued ability to make the increased mortgage payments. The bigger the increase in the size of the mortgage, the greater the probability that we might fail to make the payments.

The positive utility of buying this much more expensive property could include more space for the family to enjoy, a nicer location, the boost to our ego from living in a more luxurious property, a larger garden, or long-term financial gain from the potential increase on property values

The negative utility from failing to keep up the mortgage payments might involve serious financial hardship, being unable to pay for other things due to the pressure of paying the mortgage, the increase in work stress knowing that you cannot afford to lose your job, or ultimately the potential of the house being repossessed and losing everything.

Once we understand the relationship between these factors we are better able to judge the risk and find ways of managing or reducing the risk.

We could simply decide that to reduce the probability of failing to keep up the mortgage payments we could just buy a less expensive house and gain some of the positive utilities described above but not all of them.

Or we could go ahead and buy the luxurious house but try to manage the risk better – we could take out an insurance policy against being made redundant; we could take on a second job; we might consider renting out a room to a lodger; or we could take a long hard look at our other areas of expenditure and decide to make some cost savings such as foregoing a foreign holiday or TV subscription channels.

After all the analysis has been done on whether to buy the expensive house we should ask ourselves one question – how do we feel about the decision? Do we have a feeling of positive anticipation at the thought of buying this lovely house, or do we have a sense of anxiety and foreboding at the increased debt?

Our feelings or intuition are actually more valuable than we often realise and this is because we can’t predict the future with complete accuracy. We don’t know what the state of the economy will be in a few years’ time, we can’t predict interest rate rises or unemployment rates with pinpoint precision; and it’s important to recognise that some risks are unknown and therefore unquantifiable, which is why intuition and smart rules of thumb – know in psychology as heuristics – can really help in our decision making process.

In Part 2 of Risk, Decision Making and Critical Thinking In Times of Change and Adversity, I will be exploring the differences in decision making when we are confronted by known risks vs unknown risks and the role of intuition in helping to make better and quicker decisions.

This article was written by Dr Rick Norris.

4 thoughts on “Risk, Decision Making and Critical Thinking In Times of Change and Adversity Part 1”